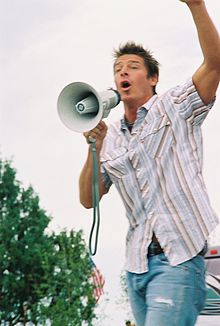 I saw the bonus episode where he made the husband and wife an "adult love dungeon" as his secret project. It had the swing and everything.

My blog certainly isn’t the most hilarious on the web (well, nobody tells a story about seeing my dad’s penis like me), but it’s decently funny. Sure I use too many adverbs, but, you know what? I goddamn well like adverbs. It’s me and since I don’t know how to write with better grammatical sense, I let it slide. A big-deal professor recently told me I write well. So there, inner critic D.J.!

Sometimes I get squishy and talk about feelings and other non-funny topics. Once I even mentioned I cry during Extreme Home Makeover.

Who pays the taxes on those houses? I’m assuming the family previously living with toxic mold in the baby’s crib-room isn’t going to be able to shell out 15k annually for an new eight bedroom, six bath palatial mansion Ty and co. raised in three days.

So, while I’m not topping the charts of Google for anything boast-worthy these days, I’m having a hell of a lot of fun.

Just yesterday I launched a new videocast with my pal Karen called oSex. It stands for “Opposite Sex” and we provide love and relationship advice to readers. I also have my weekly interview series Bloggers are Weird where I talk to other writers and they read their crap live. I published a book last month of my best material that people actually bought. I crossed 50k Twitter followers two weeks back.

While this may sound like bragging, I assure you it isn’t. I am surprised to witness all of that has happened. The magician who pulls a rabbit out of his hat and is entertained as much as the audience. That’s me.

This all started because a woman at a party told me her dream was to quit being a partner at a prestigious law firm and become an  archaeologist. When I saw her eyes light up as she explained that she was more passionate about Italian ruins than anything else I  knew I had to do something with my creativity. So I tried my hand at writing.

Since then things have unfolded. I make a little bit of money each month from the site. No, nothing has gone viral. No major accolades or awards. But I get to be myself. Another website pays me to write for them every other week. I’m on the board of a non-profit site devoted to raising awareness of mental health issues. I get a few nice emails every week from readers.

All of this exists today as a result of me exploring passion.

And yes, I still have massive issues in my life. I fall in love with women who don’t want me. I give my self-esteem away because I can’t give it to myself. I need constant validation that I’m okay from people in my life. Just last night I hurt a great friendship by acting inappropriately. I have challenges and often not the resources to cope. I’m unfixed.

Life ebbs and flows whether I want it to or not. I can’t do much in the way of controlling circumstances. It’s the greatest joke played on me – that I have influence. I really don’t. But what I can do is put my head down and keep going. Pick up the keyboard, sit down, and get to work. Tell the truth. Be funny. Share what’s hard.

Thank you for reading, commenting, sharing, and supporting. While I struggle nothing helps me like a funny or thoughtful sentence from you.

And just to prove to you I haven’t lost the previously earned #1 spot on Google for “funny blogs” I’ll be relaying tomorrow a story where I insulted a sex worker by accident and she shamed the shit out of me. It’s pretty great.