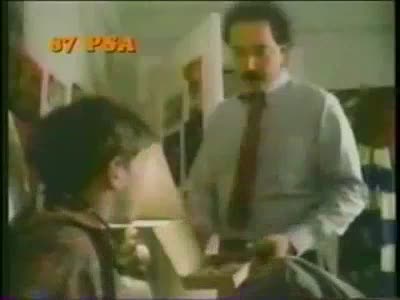 I learned it by watching you! Hey, speaking of, can we move on to benzos? Let's ratchet this party up, father!

The first official ThoughtsFromParis contest is over!

A winner has been selected for the E-Cigarette kit courtesy of the fine people at Vapor4Life.

If you’re new to the site the contest rules stated to recount a time getting busted. The winner would receive a vapor cigarette kit which allows them to light up in their bedroom without having to towel the door to keep the heavy stank of cigarettes from drifting into the kitchen where mom is making casserole.

So who gets to become the coolest smoker on the block and really sock it to those Clove-smoking lames?

Well, let’s first highlight a few of the non-winners! I personally selected these as my runner-up shenanigan favorites.

My ‘friend’ and I used to get bored sitting at home as young teenagers.  So she decided to introduce me to the joys of prank calls!  She dialed the phone and I’d read weird sentences from the playgirl magazine I had stolen.  Until one day…the police came to my school.  My MIDDLE school.  They wanted to talk to me, and they had a cassette tape with them.  My mother dragged me by the hair out to her car, and hauled me to the police station where I got to wince and whine as my mother and the police listened to my voice whispering obscenities to someone’s answering machine.  Yeah.  I left messages. Not only that, but my friend had been calling the SAME number over and over.  I did about 6 years of probation, and other than smoking cigarettes, I never did anything wrong again, because the sheer terror that I felt that day still gives me nightmares.  On the plus side, my car insurance is very affordable since I’ve never had a ticket.

Got caught fooling around with my boyfriend when I was a senior in high school. HIs mom busted up in his room and I grabbed my clothes and ran into bf’s bathroom, which was fortunately connected to his room. I turned on the sink and tried to act like I’d just used the potty and was cleaning up, but it was probably pretty obvious what had been going on. I was mortified and did NOT want to come out of the bathroom, but his mom stayed in there talking forever…so I finally (and sheepishly) made my exit, fully clothed and beet red in the face.

I got busted smoking – but it was after getting busted for sneaking into a Boy Scout Camp on Government Property! I believe the officers referred to it as “trespassing” or some crazy nonsensical thing! Pfffffft! I called it “Saturday Night!

I got busted skipping school on more than one occasion throughout high school. On one particular occasion, I was walking along the railroad tracks that ran behind my school. I was with a pack of my friends, mostly guys, headed for downtown to try and get into some trouble. I had a cigarette in one hand. I stepped out into the street at the red light on the corner, smoking my cigarette and flirting with the guys like a big shot… when it suddenly hit me that the driver I had just walked in front of was my mom. She was not pleased. I ended up back in school with  4  days of in-school-suspension and 2 weeks of being grounded. I’d like to tell you that I saw the error of my ways and reformed myself… but I’d be lying.

I was out in the city where my parents live and decided to crash at their place for the night. They weren’t home and I didn’t have a key since they got a new door. I went to the shed and grabbed a flashlight to see if I could sneak in to the house via the methods I used as a delinquent teen. As I’m casing the joint, I hear sirens and think nothing of it. I was checking out the window in the wheel well to see if I could still squeeze through when I heard the cops behind me. After 10 min, checking out my liscense and a confirmation from a neightbour I managed to avoid “Attempted B & E” charges.

And The Winner is…

I have a great story! I was caught in h.s. with a half of the green in my bag. I had stolen it from my parents stash that morning and had a huge party planned later. I got caught by the principle and he confincated the half. He ripped me a new one and said we’ll have to have a meeting with the superindent. On monday (this happened on a fri) the superintendent comes in and rips me a new one about the quarter I was caught with. He said he’s turning it over to the police and we’ll ALL have a meeting with them on wed. to figure out what is to be done with me. So we meet with the police on wed, who rips me a new one about the dime I was caught with. I ended up being let off with a warning by the cops, and a month of alternite school from the school board, and the principle and superintendent watching me like a hawk the next two years until I graduated. Oh and what’s even better is after the last meeting with the principle,superintendent, and the police my parents and I get in the car to go home. My dad turns around like he’s all pissed and says to me “I thought you said you had a half, not a measly dime bag”. I said “ya, I DID”. He told me I still owe him a half regardless, and not to pinch his stash again. We all shared a joint on the way home. The ONLY reason I wasn’t in trouble is because I didn’t rat my parents out about them being where I got it from. I had made up some b.s. story and stuck to it though all the questioning but told my parents the truth right away. This was 12 years ago.

Congratulations, burn-out! I’ll be sending out your kit this weekend. Since I was totally lame and promised everyone’s privacy I can’t print her name, but I’ll give you a hint. She may just be a famous actress who played opposite Harry Hamlin on L.A. Law. If she was Jewish she might just say, “Oy Dey!”

Oh, and by the way, winner. You have terrible parents. Congratulations and enjoy your newly won smoking apparatus!