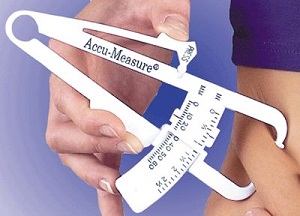 If you want to feel terrible about yourself, spend ten bucks and get one. You'll cry, guaranteed!

My father on Easter Sunday, during brunch, asked me how much I weighed. I clock in at just a hair under 6’3″. I get away with a little extra weight as it evenly proportions on my body as it gains. Well, my metabolism has finally caught up with the rest of the bozos my age. I can get fat just like you.

I was not proud to admit it but I was at my heaviest of all time. I had checked the scale just before brunch and then announced my score. I was at a robust 224.

Please understand that at my wedding, four years prior, I was at my thinnest at around 175 lbs. Of course I was totally stressed out and not eating much.

Well, I have calipers which are the things that pinch your sides and give you a readout of your fat. At the time of Jesus’s resurrection   I was at 24%. That is a big, fat boy.

As I told my parents my weight they started laughing. I’ve always been the most fit one in the family. I bike twenty miles to work (which is good), eat like a total pig (which is bad), and have a metabolism that just won’t quit. Since it’s obvious that I had some habits that needed changing, my parents quickly quieted their laughter with a serious tone.

“You need to lose some weight. It’s scary because you don’t look big at all,” my mother said. She was right!

So my dad proposed a bet. My birthday is coming up on June 10th. If I could lose something reasonable, say twenty pounds in ten weeks, then he would pay for my birthday dinner. This is great as we’re going to a pretty expensive place to eat. If I lose, however, the bill comes to me.

Now, instead of getting all caught up in the fat vs. muscle showdown, I realized I needed to peel off some easy weight first. I remember losing five pounds in a week before, when I was younger. Totally thought I would have all twenty pounds down within four weeks. I cut dramatically down on my calories. Not to an unhealthy degree, but enough to have me go to bed a little hungry. I was probably eating 500 less calories a day than I was during my normal  gorging  self.

Well, it’s been five weeks, and I’m down eleven pounds. While this is cause for celebration, it’s also cause for alarm. I only have four weeks to lose almost ten pounds.

The only option other than blatantly starving myself is to beef up the exercise. Increase the muscle mass and do more cardio. This does not come easy to me. I can’t believe I bike to work even now, as during the winter I don’t move at all. So, to add to that is crazy.

But I’m not getting stuck with a huge birthday dinner bill.

I’m glad, though, that this last ten pounds is a struggle. Struggles are good for the soul. It’s a nice reminder that I’m not the all-powerful being I treat myself as most of the time. I’m just a guy whose body is finally shapeshifting. I was going to complete that sentence with some animal, but I couldn’t come up with one. Oh well…

Once I get to twenty pounds, by the way, I’m going to celebrate by giving away twenty copies of my book to my email subscribers.

So tomorrow my lunch will be, not joking, chicken and vegetables. No seasoning, sauce, or anything that resembles taste. And yes, I know I could put a little sea salt or marinade on there, but I won’t. I want to learn to love it bland. It’s not fun, but this is work dammit!

I’m on my first diet ever, folks. I haven’t had pizza or anything too terrible in over a month. I just hope it becomes a lifestyle.

And, if not, I’ll become the jolly fat guy humorist. Hey, that’s a decent niche!