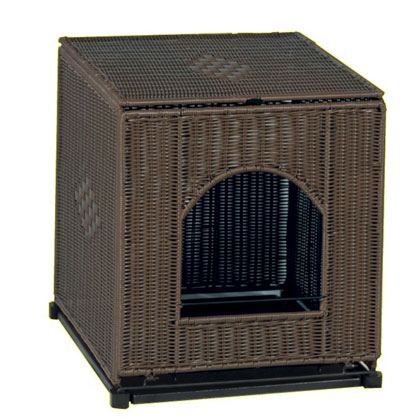 This time I’m not going to write about my cat peeing on all sorts of stuff that isn’t kitty litter.

I’m going to explain the wreckage of past and present. The destruction left in her wake. I know wake is a noun referencing past events but let’s imagine she’s still speeding along in a cigarette boat. That way the expression works a little better.

Specifically, I’m talking about the hardwood. She has decimated an area of my flooring. I am so embarrassed by this that I can’t even bear to snap a photo. You’d turn on me faster than a  simile  of something turning really fast on something else. It’s so bad that I’m going to have to get a floor guy out here to see if they can replace the affected area.

This is not a random spot in the condo – it’s right next to her litter box. She, quietly over time has peed just outside the box enough for me not to pay attention. It’s in a dark part of the house and, let’s face it, I’m not exactly Mary Poppins. I mean, I can sing and all, but ask me to sweep a chimney and I’m all thumbs.

I don’t know how it got this bad, but several years have gone by now since my ex-wife moved out. She sort of attended to that. Since I just live here I never notice the awful smell  emanating  from my otherwise nice condo. It’s bad. I know this because every time my parents come to stay they comment the moment they walk in. Well, I decided today on a bike ride that enough was enough.

The floor probably won’t get fixed until January but I’m not living in stank for the next month. Oh, as a quick update. Since my cat is back on the Prozac she’s been pretty good. If that doesn’t work I will hire one of the most respected cat behaviorists in the country to customize a plan. It’s $500 but, hey, new floorboards aren’t cheap either. I’m almost hoping she starts pissing everywhere just so I can see this vet in action. What fun!

I did some massive cleaning of the area today including washing the floor and  vacuuming. I bent down to smell and it still stunk of death. I was afraid it had soaked into the floorboards. Then I remembered two things. My ex-wife and I stupidly put an old doormat under the litter box. Not a great call for a cat who misses the target. Also, even though we spared no expense on our pets, instead of buying a box with an attached back, we opted for the more stylish wicker cover.

I’m actually really good about doing a deep-cleaning of the litter pan every few months. I pull it out and scrub all the nonsense. But, for two years it never once occurred to me to pull the cover off and clean the wicker. Well, it finally did today. I pulled the thing off, took it out to the balcony and gave it a whiff. Bingo. I assumed over the years it had soaked up cat vapor.

I turned it around to the back and found the cause of the stench. The cat had been spraying the back of the cover for God knows how long. I could see the evidence and there was lots of it. I immediately threw it away and went to PetSmart to buy her a new box that’s enclosed with a back wall. I also got a big rubber mat  just in case she starts peeing outside the box.

Well, I just sprayed a vinegar-water solution on the busted flooring and then coated the area with baking powder. Next will come the hydrogen peroxide, and lastly the  enzymatic cleaner.

Oh, by the way, whenever I sell this condo if any one of you jokers forwards this post to a prospective buyer I’m going to exact revenge  in the cruelest way I know how – by continuing to write about my cat urine troubles.