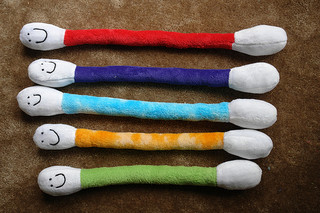 These guys would not be smiling if they saw the wasteland that is my ear canal.

In the past whenever I’ve deviated from my normal format – namely, writing about stupid things that happen throughout the day, it never ends up connecting.

Sometimes I do it  just to fill content. Earlier this year I started a “send me images and I’ll caption them” kind of thing. And while I was proud of the jokes, it just didn’t feel like what this blog is about. I’ve done the same type of experiment with other features. Anything that’s taken me a step away from my normal format ends up not really working.

As such I’m no longer doing my “Let’s Get Fixed” weekly post. While I liked the concept it never seemed to fit with my other writings. I had envisioned a large community of readers all working on their areas of improvement. And to some degree it was successful. While the comments were minimal, my viewership didn’t decrease on those days.

It wasn’t particularly engaging, however, and in some ways I thought it was this weekly segment was sort of  cop-out for me. A day each week where I didn’t have to create difficult content. My goal each day is to find 500 or more words about something I thought about or happened to me. An arduous task, but important to the writing skills I’m trying to develop. Coming up with crap to fix in my life is still useful but to structure it each week seemed forced and unnatural.

Also, I wasn’t following through on the tasks. I always try to take on too many projects. This comes from a lifetime struggle of feeling that I’m not doing quite enough. While the weekly goals were simple, the fact is I have a full-time job, I write here every night, have a weekly therapist, and am in three separate support-style groups. My dance card is full.

This week I was to clean the condo simply ten minutes each day. And I made it about half of the time. Which is fine – what I really need to do is get it deep cleaned professionally and then start the ten minute thing. I realized this two days in.

Each week I found myself saying, “Uh, I didn’t quite get around to it!” and that was a bummer. So, for now, it’s done. If you need to shed  some tears (you don’t), go grab your pillow are bleed mascara into the linen (you won’t). Oh, and if you’re one of those people that have silk sheets I question your sanity. You can slide right off the bed during lovemaking or a simple night terror. I once broke skin by sitting upright too quickly and getting propelled face-first into the footboard.

No satin either. Satin is for creeps.

To be completely vulnerable and honest, I did a piece yesterday that did not come from a completely genuine place. I always thought it would be funny to do a post on breastfeeding from a guy’s perspective. The only reason I decided to write it was that I…

Wanted to see if I could write about something insanely controversial and not piss anyone off.

I really don’t give a shit what women do with their mams. I said as much in the piece, but it was milquetoast and I took no risks. I even cut about 200 words about how, while I support public breastfeeding, if we could keep it away from the beach that would be awesome. The beach is a sexy place. It’s sacred. Let’s not change that.

But I cut it because I thought it might upset someone. And that’s not the kind of content creation I do here. But I did it and that was a red flag. And I’m not a controversial guy, either. I’m way too concerned that people like me to write extreme opinions. Also, I don’t really have extreme opinions. Only about myself.

I’m speaking at the AimingLow NonConference next month about trusting in your content and taking risks. The formula that has worked for me is very simple.

I say “success” because if I do those things, I feel good. And while I’ve never strayed more than a few millimeters off that  equation, even those minor shifts become uncomfortable for me.

Okay, enough said. Let’s get back to business. I have a q-tip story I want to rip through tomorrow. It will make you queasy.