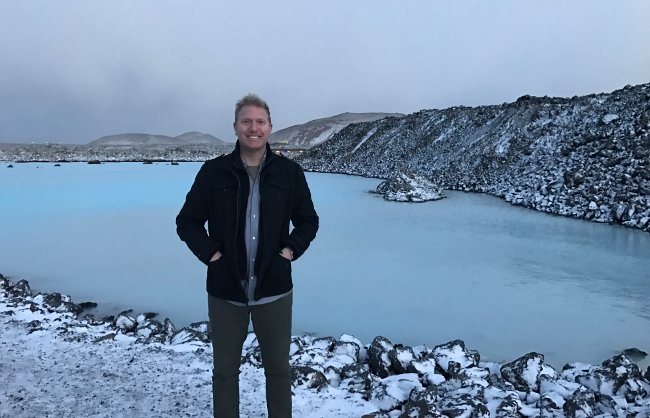 Peeing while in the lagoon is strictly forbidden and I honored this custom (out of respect).

Who goes to Iceland for New Year’s Eve?

When my sister sent out a blanket email to her friends back in June, I was in a terrible place in my life. Weeks before I had just been dumped by the woman I thought I would marry. I had sold my condo to move into hers but after the breakup found myself in a high rise rental nursing a broken heart. I’m a big believer that during crisis I’m best off doing what others tell me. The email my sister sent said simply, “Who wants to go to Iceland for New Year’s Eve?” My mind flashed to instances where people vacationed to Reykjavik and reported that it was one of the best vacations of their life. It took less than thirty seconds for me to reply. I was in.

I believe the original group was seven, but in December I learned that it would only be my sister, her husband, and me. We picked up a few books about Iceland and started reading. My knowledge of the country was nil. I was familiar with a few Bjork songs and knew they had the world’s first woman president. Oh, and something about the northern lights. That’s it.

We spent six days in Iceland exploring the country. The weather was better than Chicago and averaged around 32 degrees. Cold but not miserable. At this time of the year the sun comes up around 11:15 am and departs at 3:15 pm. If you wanted to see stuff without flashlights, you needed to plan your day.

I’m going to focus on a few events and sights, but spread over a few posts. Let’s start with Iceland’s most popular attraction, The Blue Lagoon. This is not to be confused with the Brooke Shields film of the same name where she plays a nude fourteen year old who falls in love living in the jungles of the South Pacific.

By the way, how did that movie ever get made? Must have been the pervy-est pitch meeting of all time. “No, don’t worry – we’re going to tape her long hair over her cans so you can’t see the nips. It’ll be classy!”

Iceland’s Blue Lagoon is about an hour’s drive from Reykjavik. Because it’s so popular you can’t just show up – you need an appointment. Oh, I haven’t told you what it is. It’s the world’s largest geothermal spa. Crap, you probably don’t know what a geothermal spa is. Well, I don’t either, but here’s my best attempt at explaining. 100% of Iceland’s power comes from renewable sources likes sun, wind, and water. Because of the volcanoes in the country, the lava underground heats up the natural water. Power plants take in the hot water and harvest electricity and then ship the water back out into the earth. Near the Blue Lagoon is a power plant. Instead of just feeding the water back into the ground, somebody figured it would make for a fun spa experience and built a huge pool. The water leaves the power plant and tunnels into the Blue Lagoon where it swishes around for two days before naturally returning to the earth. It’s a milky blue color and averages just under 100 degrees Fahrenheit.

When you arrive at The Blue Lagoon the first thing you notice is how many other people are there. There’s hundreds of other tourists running around and if you are looking for a relaxing spa day, this isn’t going to meet your needs. Odds are your idea of relaxing is not to swim around the world’s largest jacuzzi while it snows on your face. Because that’s exactly what happened during our trip. Well, it actually did much worse than snow on my face. But I’ll get to that in a minute.

My brother-in-law and I booked massages and I thought we’d be shuffled off to private interior rooms with folding tables, patchouli incense and bad new age music. Nope – this massage would be done in the water. Outside. We quickly showered (a requirement before entering the lagoon) and stepped outside to find the water-massage area.

We found our courage and stepped out into the air, glancing around for the water-massage area. It was a good fifty yards from away and the cold air pierced my body with impressive force. I couldn’t run because the deck was littered with snow and ice and the risk of slipping was very real. Plus, it’s important to look cool in front of other people, so I shuffled over at a pace that suggested “Huh, is it cold? I hadn’t noticed.” I’m sure the other tourists were impressed with my ruggedness. Meanwhile frost had developed on my chest hair and I could no longer feel my feet. We reached the massage pool and quickly stepped in the water. The water was so warm that within a minute I no longer noticed the outside freezing temperature. I was comfortable. There were eight masseuses, seven of them men. My brother-in-law and I both prayed we’d be assigned to the one female. Nope. We got dudes.

Let me explain the water-massage setup. It’s a pool where the massage recipient lays on a flotation mat, face up. There is a blanket on top of the body to protect exposed areas from the cold. Each masseuse wore a thick bodysuit and wool winter hat. The men have dense beards. While I didn’t snap a pic of my masseuse, he looked exactly like this.

My masseuse, whose name I didn’t catch but I’ll call Magnús (because it was probably Magnús) hoisted me onto the float raft and draped a heavy blanket across my chest. He asked if I wanted a towel to cover my face. “No, Magnús. Did you not see how I strolled over without discomfort even though my left pinky toe went into frostbite?” He shrugged and started the massage. I was a few minutes in and starting to relax when the first piece of hail hit my cheek. Within seconds my face was being pelted with small, stinging pieces of ice. “Uh, Magnús, I’ll take that face towel now.” He laughed and a few seconds later a towel draped over my eyes protecting me from the ice bullets. The next thing I knew I felt the face towel came off and I saw clouds. Instantly I snapped back into consciousness and realized the session was over. I had fallen asleep. In a hailstorm. Face up and in a pool.

I shook hands with Magnús and exited the massage area. He didn’t say how impressed he was that I could brave the elements, but I could sense it on his face. However, I will not be joining any viking armies to further prove my masculinity, but that’s just because there aren’t any decent viking wars going on right now. Which is a bummer because I’m certain I’d be excellent at pillaging. Plundering, too. I do, though, get seasick like you wouldn’t believe. I’d be heaving my guts before we left port. Bonine – I’d have to bring a shitload of Bonine. Or those tabs you put behind your ear. Oh, and I’d have to grow a beard, I guess.

The Blue Lagoon part II is coming next.