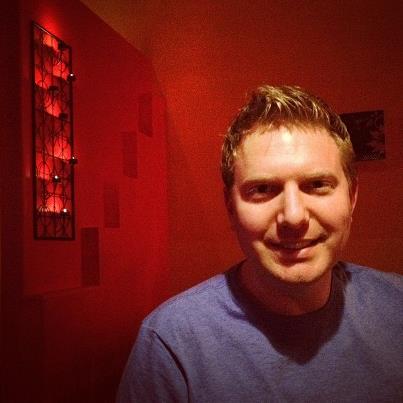 Michelle hasn't sent over the photos of us at dinner, so you just get me at dinner for now. Lucky you.

One of my best friends, Michelle, called me late afternoon.

Hey, I’m flying to the Chicago. I’m in the air – doing a commercial for WalMart. Let’s hang out!

I was thrilled. I hadn’t seen her in over a year yet we talk every week. During my divorce and other hard times, she’s been there. And I was introduced to her through my blog. She was a reader and now we’re very close. Had I not started this blog I wouldn’t have met her.

She was flying into Midway airport and I work near the train that goes out there. I loaded up my dog in the backpack and railroaded it to the airport. As I got there I reached into my jacket for my phone. It flew out of my hands and into the air. The phone landed with a thud on the ground. No big deal – it’s happened before. The battery went flying and the case came off.

I examined the glass and the phone. Everything looked okay. Then I went to turn it on. The screen wouldn’t come on. It was black. I looked closer. The screen (on the inside) was smashed to bits. The phone turned on just fine but I couldn’t see poop. I farked the phone.

This was a problem as now I couldn’t make phone calls and I had no idea where Michelle was hanging out. I knew she had to get her car at Enterprise so I headed there. I was really in a panic because I didn’t know her number. I began to think and realized if I could get to a computer I could look up her number in my Google contacts, then borrow a phone, call her, and have her come meet me. This was getting complicated.

Thankfully, just as I approached a man to borrow his tablet, she rounded the corner. We embraced and I told her how bummed I was to have just broken my phone.

At the Enterprise window the clerk hustled us upstairs where they do special check-ins for people with entertainment accounts. I borrowed Michelle’s phone and began looking up the closest AT&T store as I now needed a new phone. When we got to the counter and the car was ready to go, they asked for Michelle’s ID. She couldn’t find it.

This wasn’t an issue as I saw her pull it out at the first Enterprise window. All we had done was walk fifty yards and take an elevator up. Nope. Couldn’t find it. I backtracked several times searching the ground just in case it had fallen out of a pocket. Surely it must be in a pocket or her computer bag. We just had it moments ago. It was gone.

She has to fly out in a few days so that isn’t going to be fun. Apparently you can do it without a license or ID but the TSA really busts your balls. She has no choice.

So, me with a broken phone, her with no ID, you’d think it was a shitty night. And that part of it was. But to spend time with one of my favorite people on the planet, that’s special.

I have a crappy phone now, as my contract isn’t up for another month and they couldn’t advance me the discount. I’m not happy about it, but at least I have my ID. And at least Michelle has her phone.