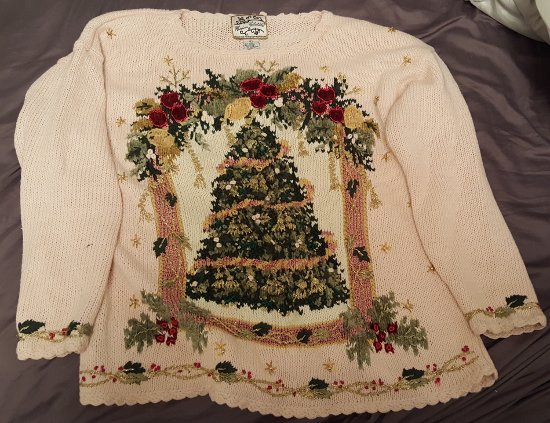 The last person that wore it before me had gone through menopause 17 years before.

Normally, I mail out a handful of holiday cards to readers.

In previous years I’ve held contests to win these valueless (but sentimental) items. I’ve sent cards to Africa, Australia, and a bunch of other continents that I can’t recall at the moment. This year, however, I wasn’t able to get the whole thing going prior to the holidays. Yes, I completed the card, but it was only sent to my innermost circle. Friends and family. Oh, and the fishmonger with the shop a few blocks over. He gave me a good deal on tuna steaks last fall. The good news is that even though only my close friends and family members received a card, you too can electronically enjoy this year’s creation. In this very post, no less! What good fortune!

My original idea for the photograph was not what ended up on the final card. I pitched my girlfriend a manger idea with her playing Mary and me the baby Jesus. While I still think it would have been funny to recreate the birth of the Christian savior, it was maybe a little too crass. I mean, we each still have a living grandmother. It would be uncomfortable at best to explain why my girlfriend was giving birth to me.

A few months before on Halloween my costume was that of a new creation, Poodle Businessman. This alter ego was well received at the Halloween event we attended. So well received, actually, that we thought it might be funny to start a whole Poodle Businessman persona. I could carry the mask around for the next year and every so often whip it out for a photo. Poodle Businessman would be spotted at Nordstrom Rack looking at the irregular ties, for example. Or enjoying surf and turf at Gibsons Steakhouse. On vacation Poodle Businessman might be photographed walking along the sand as the sun was setting. Or flying business class to Sacramento.

The problem was that I didn’t want to lug around a dog costume everywhere I went. You can’t breathe and there’s no eyeholes. Plus, the thought of asking my personal trainer to snap a photo of Poodle Businessman doing a chin-up is humiliating. I’d have to explain the whole thing and it just sounds dumb. Because it is dumb.

Maybe Poodle Businessman will make future appearances in photos and stories this year- I’m not ruling it out. But for now, enjoy his most recent adventure. On the holiday card of 2015.

The best part of this year’s theme was that I’m sure 90% of the people who received the card do not read this blog. I’m convinced there were a lot of heads being scratched trying to figure out if there was some deeper joke or meaning going on. The fact that it likely confused most everybody pleased me.

The woman in the photo can be followed on her YouTube channel, Walloping Teaspoon. She sleeps with Poodle Businessman.

One quick point before we conclude. What you’ve overlooked in the above photo is the sweater I’m wearing. It didn’t show that well because of my gigantic cat. This is a bummer because it’s a work of pure insanity. Somebody online was selling a used woman’s pink sweater complete with sewn-in shoulder pads. How could I not buy it?

Happy holidays and new years and all the rest. And if I can address you for a moment, let’s try to do better this year. In all areas. You know you slid through 2015. We all saw you screwing around. That’s okay. I did, too.

Thanks for reading and sharing with your cubicle mates. Also the one family member that has a sense of humor, you should show them my stuff. Not for my ego, mind you. Do it so that at the next family barbeque they’ll come running into your arms with a, “Thank you, thank you, thank you! Thoughts From Paris is just what I needed to get through my divorce/job loss/kidney transplant.”

People tell me my dopey blog is good for coping with tragedy. It’s a gift, I guess.

3 thoughts on “Behold the 2015 Thoughts From Paris Holiday Card”