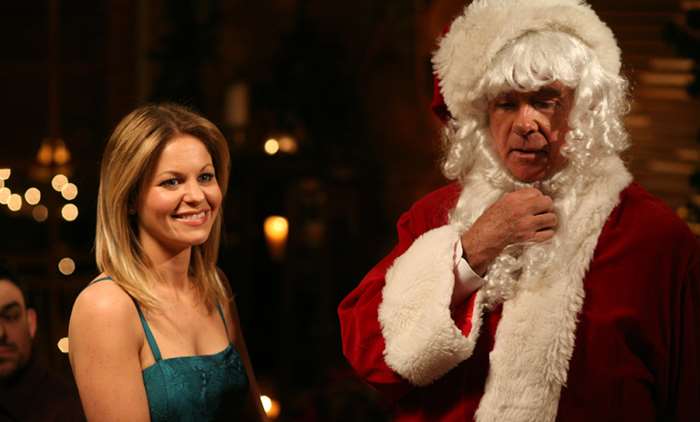 If you know what this is, you've wasted your life.

I had to be talked into this year’s card.

My girlfriend was certain it would land big with our friends and family, but what did she know? I’d like to think, for my own self esteem, that I’m the only one in the relationship with a rapier wit. Turns out she was right and the card was well-received. Many even reported that it was my best card to date. The credit for this success lands 100% in Liz’s lap.

Here’s how the idea came to be.

Months ago I took Liz to go see one of my favorite stand-ups, Jen Kirkman. At some point during her set, Jen turned her attention to Hallmark Christmas movies. While the jokes about these movies were funny, I had never seen one (nor heard of them). But as I looked around the audience was howling. I would estimate that 75% of the audience were female, so I chalked it up to something that women know about, but men don’t. Like heavy spotting days.

Later that night Liz declared that this would be the theme of our holiday card. I tried to convince her that nobody would get the joke. Since I had never seen one of these movies, clearly the masses hadn’t either. Liz reassured me that, not unlike most of our arguments, she was correct. After more resistance from me, I was encouraged to shut up. Also, I didn’t have a better idea, so I relented and agreed to move forward.

We took to Google Images which, if you’re not familiar, is the best place to steal copyrighted images. I’m not exaggerating when I tell you Liz and I looked at forty Hallmark holiday movie posters before deciding on a winner. This took hours and contained some heated arguments. Should we pick the cover where the two main characters were playfully throwing snowballs at each other, or the one where the guy is trying to balance seventeen packages in his arms while the woman is staring at the camera shrugging? Eventually we selected one, but for the life of me I can’t remember why it was chosen.

Next, we needed a Photoshop expert. Via Fiverr I hired a graphic designer to do the superimposition. We had to go back and forth a few times, and ultimately he still made my face too big, but it was close enough.

I went back to make sure superimposition was a word, because I was pretty sure I had fabricated it. Turns out it’s legit! Use that at your next cocktail party to impress the babes.

Now again, I was concerned that the joke would fail. And I take a lot of pride with these dopey holiday cards. I try to make the jokes hit like a sledgehammer – obvious and vulgar. This time it wasn’t really a joke, per se. It was just a reminder of these dumb movies that Liz convinced me everybody (but me) knew about. A reference to a pop-culture juggernaut, if you will.

The cards went out and we waited for response. And, to my credit, a few people didn’t understand the reference. But out of the 100 or so cards that we sent, it was almost universally praised (unlike the quality of these movies).

I did finally watch one on Christmas Eve. It starred Alan Thicke (of course) and Candace Cameron (also, of course) and halfway through her trying save the ski lodge I nearly jammed a golf pencil into my jugular. If you’ve ever watched a Hallmark Christmas movie, you know how painful they are to absorb. But instead of ending my own life I retreated to the guest bedroom and yelled at the wall for a few minutes. That calmed me down and I was able to return in time to see dad and daughter reunite on Christmas day. Also, the ski lodge didn’t fold, so that was nice. And, even though the movie was complete garbage, watching Alan Thicke and Candace Cameron embrace while the credits rolled was admittedly satisfying. It felt like Christmas.

One thought on “Behold the 2017 ThoughtsFromParis Holiday Card”