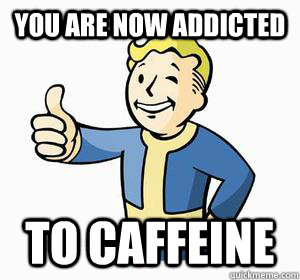 The victory lap equates to a night of eating pizza until passout.

Before the carbs and fat sink my consciousness I’m going to attempt to eek out this post.

I’m not proud here, but I’m back on caffeine. I’ve written about swearing off the stuff a few times. For a month or so I’m off it and then I get back on. Lately, I’ve been using it like crazy.

Most of America is hooked on caffeine, so what’s the big deal? For me, it’s different than the average consumer. I use it as an escape – a way to change my state. A high, as it were. In short, I abuse it.

The problem isn’t that caffeine is ruining my life (it’s not). It’s that I am “on” it most days all day long. Over the past few months I’ve become habituated to the drug and its positive effects are almost nil.

I no longer receive energy from caffeine. Maybe a slight pick me up in the morning, but it fades quickly. I have to increase my dosage for continued alertness. Since a stimulant’s main job is to stimulate, and mine isn’t working, what am I left with?

Well, I’ll tell you because I’m on it right now. I had two Diet Pepsis tonight before writing. For some reason caffeine now makes me anxious and scared. I’m not a naturally fearful person and I’ve never had anxiety problems. Yet as I’m typing this I’m feeling a slight sense of impending doom. Also, caffeine depresses me. It reduces my humor to nothing and induces some less-than-pleasant feelings. It makes me dark and foreboding. It crushes my creativity. I don’t get the rush of ideas throughout the day that I get when off the stuff.

So, with limited upside and a whole bunch of downside, why do it at all?

That’s a darn good question. I guess I’m still hoping caffeine will work – that it will give me pleasure and make me feel good. It did this in the beginning. No longer.

Well, I’m obviously using it to escape – escape what?

Somehow I have the misaligned belief that if I’m not having extreme experiences I’m missing out. Of course 99% of life is living in the middle and not on the edge.

This is what I’m running from. In an effort to avoid the discomfort of regular life I escape through caffeine.

I’ve been exploring this addiction (with me it’s a definite addiction) for a few weeks and I’m about ready to let go of it entirely. Well, first, it isn’t working anymore as I mentioned earlier. But second, I’m retarding my growth. I’m not feeling emotions that would naturally arise. I’m just feeling the effects of the drug.

Today I decided that I wouldn’t buy caffeine no matter how much I wanted it. I walked by a grocery store and didn’t go in. My inner addict yelled, “You’ll feel better on it! It’s going to be fun!” Then, another voice started listing all the ways in which it would harm my day. These two voices battled for a few seconds.

Tonight, however, the addict voice won and I finished off the last two cans I had in the refrigerator. And just as I suspected I am feeling the negative effects throughout my body. They’ll wear off soon, but I’ll have the urge to drink caffeine again tomorrow.

The answer is simple – I must learn how to stay present without escaping. This means sitting in normal day-to-day discomfort. Boredom. Tiredness. Natural states we all experience. The feelings that I am terrified of.

I’m excited to get off the stuff and back to regular life. I’m sure I’ll be battling it over the next few days, but it’ll pass and I’ll be back to my normal non-extreme self. This time I’ll try to stay there permanently.