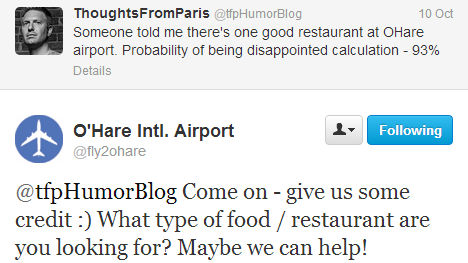 The past few weeks have been unfortunately busy. I’m trying to cut down on my adverbs, by the way. I couldn’t even make past the first sentence. Dammit.

Anyhow, my best friend’s father passed away and I traveled back to Peoria to attend to the services. I also was in a bad car crash (thankfully nobody was injured). Since then I’ve purchased a new car. Oh, and I went down to Dallas to visit my aging grandmother this past weekend.

All that I’ve been able to creatively is blast out a few funny tweets now and again. I wish I could get paid for that, by the way. Some company told me that due to my social reach each tweet of mine is worth $99. This sounded awesome until two months went by and the broker had failed to provide me even one company willing to cough up dough. So, technically, my tweets are worth nothing monetarily at the moment.

However, I have had a few funny responses from unlikely corporate sources.

First was O’Hare airport. Believe it or not, they have a twitter account. I’m sure it’s probably designed for emergencies. But behind every Twitter account is a person manning keyword mentions. And sometimes they have a sense of humor. Here’s what transpired…

First I love that they got the joke. Second, you’d think they’d have something better to do that respond to a bozo goofing on shitty airport food. I nearly replied with something vulgar and horrible, but I decided to be nice. I went to the one good restaurant, and to be fair, it was the best meal I’ve ever had at an airport. I tweeted back to them and they thanked me. I then wanted to start a conversation about smelly foreigners in their bathrooms, but I decided against it.

Then, yesterday on my way back into Chicago, I tweeted this out…

A pretty innocuous joke. Not my best. Today they replied:

I couldn’t tell if they were being silly or serious. I am never serious on Twitter. So we went a few rounds.

Now, this is a company with a sense of humor. I love that. I sent them a DM and offered to work out a funny bit we could do together on my blog. Not sure if they want to be in bed with me, but I give them props for having a little fun. I grew up eating Chili’s – it was the first good chain restaurant to come to Peoria. To have them tweeting with me is sort of surreal. Been eating there for for over twenty-five years.

I recently pestered Jockey to do a jag with me because we tweeted a little about their new Stop the Stink underwear which I thought was hilarious. I wanted to be the official Stop the Stink blogger, but they didn’t bite. I had a bunch of good ideas. Oh well…

I never thought working with brands would be fun, but after last month with Cottonelle, I realize that some of them are great sports. I know you don’t come here interesting in reading about me pimping out products and services. I don’t want to be that guy anyway. But once in awhile I can team up with someone to do a funny bit.

I have some future posts coming up on aging, the loss of friendship, caffeine addiction, how to buy a car from sketchy Polish guys, the new website for men I’m creating, why Apple initially banned my ThoughtsFromParis app, and how watching your forty-seven year old uncle run 100 yard wind-sprints up a hill is depressing. You know, the stuff I love to ponder.

Thanks for sticking with me through this truancy.