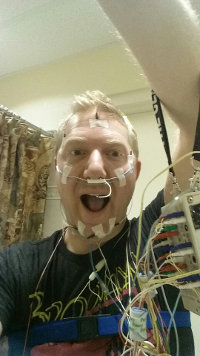 They also hooked one up to my nuts, but just to be funny. Those wacky technicians!

For as long as I can remember I’ve been exhausted.

I started taking naps my last year of college. I was studying meditation and self-hypnosis and would put myself in a deep trance following whatever instructions the new-agey book I was reading at the time suggested. Now, many years later, I realize that what I was really doing was falling asleep. I’d wake up fifteen minutes later feeling mildly refreshed. Meanwhile I thought I had meditated and achieved nirvana.

These short naps have continued to present day. Except now they are long naps. An hour at least. On the weekends, sometimes two to three hours. Oh, and no matter what I’m always tired after I wake up.

It only occurred to me recently that I might have a sleep disorder.

I always thought I was one of those people that needed a lot of sleep. I log around seven per night and I probably should do nine. But even at seven, when I get home from work, I often nap for an hour. I go right into dreams, too. Also, I fall asleep within about twenty seconds.

(sorry, that joke was a real stinker)

Anyway, I jumped  online and started looking up information on sleep disorders. Said on some page somewhere that I might be a victim of sleep deprivation! Which made little sense because of the heroic amounts of sleep I log, but hey, I ain’t no doctor.

I’m one of those guys that loves going to doctors. I’m pretty much never sick and have no recurring illnesses, but it’s fun to learn from specialists. One time I went to see an endocrinologist to have  him check my testosterone level. (I thought I had too much). He laughed me right out of his office. As I was leaving he shouted, “Also, never take vitamins. They do nothing!”

When I arrived at the sleep clinic I told the doctor about my sleep patterns. She thought I might have sleep apnea and/or narcolepsy. A sleep study was scheduled and a few days later I was back in their office, only this time in a room made up to look like I was staying at the Hampton Inn. It was a faux-hotel room outfitted with a bed, nightstand, bathroom, tv – oh, and cameras and microphones. I changed into pajamas and then sleep tech Tiara hooked me up with electrodes from head to toe. I couldn’t have been more excited.

I had a little more trouble falling asleep (according to the data it took me seven minutes), but I made it through the night. Because my bladder is small and my prostrate is large (also things I’ve had checked out by doctors), I get up twice a night to go to the bathroom. I had to say out loud to Tiara who’s watching and listening to me sleep, “Uh, I need to use the restroom.” This is an odd thing to speak into the darkness of a bedroom. Even weirder is to hear a voice back telling you she’ll be right there. Then they have to unhook your wires and wait outside while you flush out that evening’s Fresca. It’s embarrassing.

The next week I met with my doctor to go over the sleep study results. AND WHAT CAME NEXT SHOOK ME TO MY CORE.

It turns out I wake up on average 10.9x per hour. That’s amazing considering I only remembered waking up when I needed to go potty. She explained these were what is known as “micro arousals” (and yes, I already thought of a joke about small-dick boners). My brain was waking up all the time, probably from the snoring. Also, I stopped breathing 4x per hour. Thanks for building me in your image, God!

I asked if they could do surgery to fix whatever was wrong. In a weird way I was kind of hoping they could just snip something. God knows I didn’t want to do any work to correct this thing. Surgery wasn’t an option, sadly.

It was pretty clear to them that I had sleep apnea. The doctor went through some physiological explanation that I zoned out for and I came to as she was explaining treatment recommendations.

She said the gold standard for sleep apnea treatment is to implement a CPAP device.