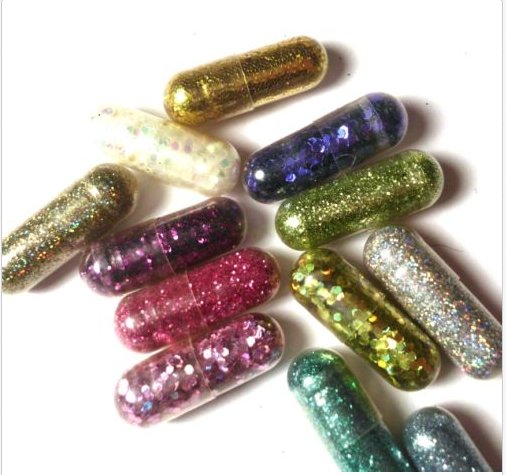 Which one would you choose for the maiden voyage? It's tough, right?

I was hoping for fireworks, M-80 style.

A few months ago one of my friends sent an email with the subject line “You Can Poop Glitter With This Pill!” In the message was a story about an Etsy shop that sold pills jammed with thousands of pieces of non-toxic glitter. Apparently the stomach doesn’t digest these shiny travelers and passes them unscathed through the intestines into the colon. The Etsy merchant had many different colors including a rainbow option called “Unicorn Style.” I replied to my friend with, “I love this.” His reply – “D.J. – you have to try this. Please.” He’s married and not allowed to participate in such nonsense.

Twenty years ago I almost did something like this. I had read about a compound for urologists called methylene blue. It works on urine doing exactly what you’d think. And who wouldn’t want to pee blue at least once before the devil comes to drag them to hell? The problem was that I was nineteen and didn’t have any doctor friends who could score me a batch. I also wasn’t into drugs so I couldn’t call up a dealer for a special order.

In my twenties, I met a urologist at a party. After he told me his professional title, I yelled, “OMIGOD METHYLENE BLUE!” I had questions. Did it really turn pee blue? Was it harmless? If we doused the punch bowl, could someone take legal action? I tried to find the courage to ask if he would be willing to “accidentally” drop a pill on the ground and walk away (like how street-smart drug dealers do it in movies), but I chickened out. To ask an M.D. to hook me up so my pee could change color sounded, well, stupid.

I have a few regrets in life. Most of them involve hurting the feelings of women that date me. The methylene-blue-coward-incident-with-the-urologist, however, ranks near the top. And, even after I married someone that had the ability to prescribe medicine, I never could bring myself to ask. I didn’t want to be responsible for having her medical license stripped.

After my friend’s email I clicked over to the Etsy site to read reviews of former glitter pill customers. There were a few hundred reports, almost all of which rated the product a perfect five stars. Most comments went something like, “I can’t believe it but I just shit glitter!” Sorry for the vulgar language. I’m offended, too.

I had read enough. It was time to act. You could purchase a small starter pack, but you had to choose one color. I tried to think about what color would make me laugh the hardest. Gold seemed like an obvious winner, but maybe there wasn’t enough juxtaposition against the BM? Jewelers often place diamonds on black surfaces to make the shine pop. I almost clicked on the silver option for this reason. Thankfully there was a way to try all the colors. A Whitman’s sampler of glitter doody, if you will. Also, this was the best value for the price. I might be sophomoric, but I’m also fiscally responsible. I purchased a multipack of twenty.

In many self-help books the author instructs the reader :

Once in awhile do something just for you.

This was one of those purchases. There’s no way I could share this information or experience with anyone. My girlfriend, whom I live with, would stab me with a cocktail fork should I call her into the bathroom to gaze upon pink, sparkled guano. As a rule of thumb I believe secrets are unhealthy in relationships. But I chose not to reveal this project to her. I want her to continue to think highly of me. Logic suggested being forthright would have the opposite effect.

The glitter bomb capsules arrived a few days later in a plain manilla envelope. Inside was a heavily scotch-taped container with cotton at the top. I chose to believe all of the materials were of medical grade. The Etsy seller’s name was “GlitterShitz4U” so I’m probably giving them more credit than deserved. I hoped that she/he (probably he) worked in a sterile lab with the white coat and gloves and acetone.

The seller was savvy, however, because you had to check a box that you would not ingest the capsules for any reason. It was mandatory before the order would be processed. Thanks a lot, LAWYERS.

I chose the blue one for my first adventure.

I don’t know anything about how long it takes food to move through my body. I slammed the pill dry (because real men don’t take their glitter pills with water) and waited. I figured a day or two at the latest before I got to witness the magic.

But nothing happened on day one. Regular, boring brown. I walked around the bowl from different angles studying my earth like the Zapruder film. You know how glitter sometimes catches only from one direction? Nada. Oh well, tomorrow was another day.

Nothing on day two. A mild panic set in. The pill was either stuck in my body or I had passed the pill intact. Or maybe my stomach acid ground up the sequins to be used for glutamine or whatever. I went back to check the reviews on Etsy. It seemed like everyone was enjoying their personal glitter-bottomed party except me.

I doubled down on my fiber supplements for day three. While I didn’t get the explosion others had written about, I did witness evidence that my body was passing glitter. One single spec of blue glitter showed up on a piece of toilet paper. I hoped more was coming.

But it never did.

Day four and day five were another bust. I decided to up the ante and downed four additional capsules. Surely this would produce the intended result. A risky move, but I was desperate.

It’s been a week and either the glitter is forever lodged in my appendix or it passed without my awareness. And you know what? I’m not upset. I did my part. And that’s all I can ever ask of myself.

I still have fifteen pills left, and they’re sitting in a box next to my cuff links. My girlfriend saw them and I had to explain what was going on. She shook her head and murmured something as she walked out of the bedroom. I’m glad I didn’t hear it.

I’m not going to leave the Etsy seller a bad review. I assume that my body was defective and not their pills. I’ve heard that the Lord works in mysterious ways. I’m not sure why he would deny me glitter pleasure, but he’s the one with the omniscience, not me. I chalked this one up to divine planning.

Although, if the pills are permanently jammed in my lower intestines, it will make for an interesting next colonoscopy. It’s scheduled for five years from now and I’m sure I’ll forget about the glitter by then. When I hear the surgeon say, “What the devil is that?” I’ll sure we’ll both have a good laugh. Hey, better than a polyp, am I right?

9 thoughts on “The Glitter Pill Disappointment”