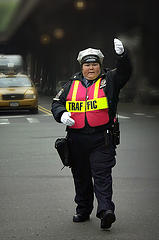 The whistle never leaves the mouth and the gloves never come off. And yet, we still don't respect the traffic cop.

For the second time in about six months, I got pulled over.

I was driving to a doctor’s appointment this evening and talking to the friend I wrote about the other day where I offered to eat her kidney stone. I live in Chicago and it’s impossible to speed. I’m even one of those nerds that does a complete stop at stop signs. I’m not all law-abidin’, though. I turn on red all the time even when there isn’t a turn arrow in the left lane or if there’s a “no turn on red” sign in the right lane. I’m an outlaw when it comes to turning. But, this time I know I was just driving along at 27 mph through downtown Evanston.

In a way I was excited. I knew I hadn’t done anything wrong and I wanted to see what the cop might say. Maybe my taillight was busted. Maybe he was a blog reader and recognized my profile. Maybe he was just lonely and wanted to get weird with someone.

Then it hit me.

I went from chuckling at the idea of talking to the office to mildly freaking out. I realized I had two problems. First, my registration had expired two months back. My dad pointed it out over Thanksgiving. I must have missed the notice. I mean I hardly drive the car. You all know that I bike to work or ride the subway. I have one of those cars that takes premium and gas is expensive.

Well, it just so happened that I finally got off my fanny and renewed the registration a few days ago. Great timing.

Now the next thing – I didn’t have a new insurance card.

I remember growing up I feel like I got a new State Farm card every two months. I had a stack of those things and I never put them in my wallet. Who had the time to keep swapping them out? At sixteen I had cigarettes to smoke. I was busy.

Since I’ve only been pulled over (before this) twice in my twenty years of driving, I sort of forget that insurance cards are important. I’m insured and all, but don’t feel the need to flaunt it to my wallet every time those cards come in. Years ago I just got into the habit of tossing them. Not a great move.

The officer came up to my window, and while I know I’ve done nothing wrong, this is going to sound, well, not good.

Asked for license and insurance.

I found an insurance card in my wallet that expired back in December of 2011. I handed it to him and explained that I just called State Farm a few days back to order a new card (true). I assured him that I was insured and I was sorry not to have the updated card with me.

Then he said, “I pulled you over because of your registration had expired.” Of course.

Now I had to transition from the card to registration and provide basically the same answer.

I just renewed it this week (also true) online. I hadn’t realized it had been expired but as soon as I did I paid it in full.

He asked if I had any proof. I thought fast.

Yeah, I bet they emailed me a receipt. I’ll look for it!

He said that was fine and went back to his car. I searched through every inch of my deleted folder and inbox. Nothing. But I knew I had paid. He was walking back up when I thought fast.

I’m sorry – I don’t think they sent me a receipt, but I can pull up the credit card charge!

He stood over me as I punched up my bank app and headed to the credit card purchases. There is was – $128 to the state of IL for license renewal. He said that was fine. He also believed me about the insurance.

I’m sure he already knew this and had run the info in his car computer. They must be able to see if your registration is good and if you have insurance. But, even though I think cops are usually the dicks you went to high school with, I’ve always had good experiences. You just have to let them be the boss and give away your power. It’s worked for me.

I’m pretty excited to having gone two for two on pull overs and no tickets. The last time I did get a warning, but I still count it as a win. So, be a dick all you want – I really don’t care. If yelling at me means I avoid a ticket, then go ahead. I’ve been married before. I can take it.