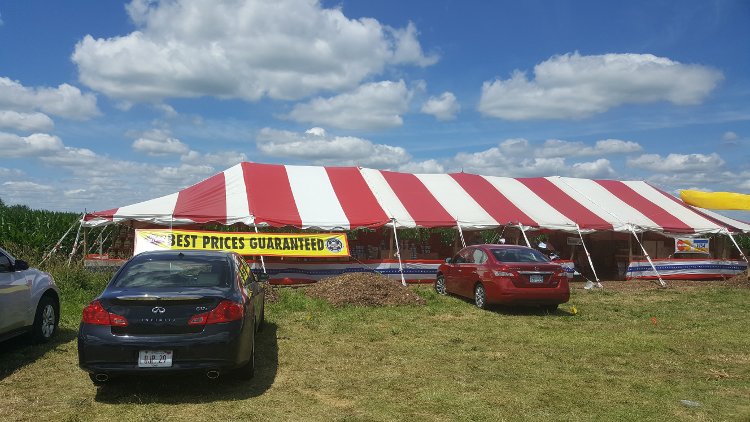 I had never bought fireworks before.

As a child fireworks were illegal in Illinois. If, in high school, you wanted to shoot bottle rockets at your friends while running around a golf course drunk at midnight, you needed to travel out of state to procure the armament. The statutes must have been repealed because this weekend I came across a tent on the way to my parent’s home chock full of China’s best. Google Maps was navigating me through a rural part of the state when I saw the fireworks stand. It was situated in a cornfield with a huge sign revealing that that tent had the “best prices guaranteed.” I almost didn’t stop, however.

What got me to pull over was a phone call. My parents had planned a white water rafting trip for this weekend. This would be a test to see if, as a family, we enjoyed it enough to book a more intense rafting excursion . The word was that this place in Illinois, halfway between Chicago and Peoria, had decent rapids. I didn’t get to find out because the owner called me on my drive to Peoria to let me know that the river had dangerously low water levels and that all rafting trips were canceled. His voice had a thick country accent and he used phrases like, “Shoot!” and “Dawggone it!” while relaying the bad news. As I hung up I saw the tent. Since I had never bought fireworks, and our weekend plans were ruined, I pulled over.

Inside the tent I walked straight to the owner and asked for the best option if I wanted to blow up some dorm toilets at the local all-girls college. Not the best icebreaker, I confess, but she laughed. I said I would need a variety pack and that it would only be for me and my parents. She pointed to a massive pack and told me it was what I wanted. Nay, what I needed. Since I trust most everyone, and also I had no idea what I was looking at, I commanded her to ring it up. $160 later my car was stuffed with a 6 ft box of explosives. My dog rode on top of them in the back seat. She didn’t mind.

Because July 4th fell on a Monday this year I wasn’t going to be able to stay in Peoria the night of the actual fireworks event. I have to work on a Tuesday, and, I have a perfect vantage of the fireworks here in Chicago from my apartment. And, I’m assuming the Chicago fireworks budget is a smidge larger than the Peoria coffer. Huge Chinese lobbyists in Chicago, you know.

Speaking of Chinese – my former girlfriend and I would play ping pong at a real-deal Chinese ping pong club all the time. This place was straight out of the movie Balls of Fury. I’m about the greatest caucasian ping pong player you’ll ever meet, and she and I would rent out tables there. I bet your town has one. Look in the yellow pages under “ping pong.”

So, last night, on the eve of the 4th, we decided as a family to light off my cornfield-purchased fireworks. Since I had bought some heavy duty stuff the question now became, “Where do we light this stuff off?” I suggested the backyard but was quickly voted down as my parents had just re-bricked and landscaped the back patio and there were trees and grass and other things that could catch fire. Also, it’s a neighborhood so you didn’t want to land a stray roman candle onto someone’s roof  (but seriously, what kind of asshole builds a home with a wood shingle roof?). My father, the great problem solver that he is, reminded us that there was a church a block away with a huge parking lot. He scoped it out and said there weren’t any cars there at the present. I told him that certainly there would be a security guard patrolling the perimeter. My dad shrugged.

I won’t bore you with too many details, because, well, it’s fireworks. You light the fuse, run away and then stare at the sky for a few seconds. Then, repeat ad infinitum. And that’s what we did. Nobody came out of the church to shoo us away. Back when I was nineteen I was a security guard (at a Jewish retirement home) and, if this guard was anything like me, he was inches deep into a Dean Koontz novel, not paying any attention to the flashes of fire or gunshot noises outside. Remind me to tell you about the three times I found dead people that summer at the retirement home. Not hilarious stories, per se, but a few decent chuckles apiece.

After lighting ten of the big cylindrical fireworks, we got busted. A woman in a minivan (why is it always a woman in a minivan?) was driving by, saw our shenanigans, and pulled into the lot. I was busy lighting fireworks so I paid no attention. In between one of the fire-showers I heard her yell, “This is private property! You are all trespassing!” She grumbled another sentence to my mom and then drove off. To her credit she didn’t threaten to call the police, but we got the message. We packed up the remainder of the booty and headed home.

After we got home it occurred to my father that the church coincidentally was of the same denomination as our family. My mom should have said, “No, it’s okay, we’re Presbyterians, too.”