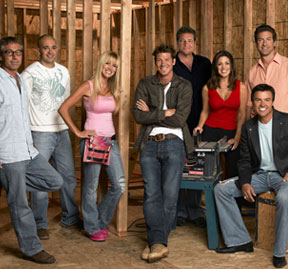 When you built the racecar bed for that one wheelchair kid, my tear ducts actually exploded.

I’m going to take a break from my daily thoughts and my stories about being a non-Catholic in a Catholic high school or the time I thought I was dying (but it turned out I had just eaten some beets).

No, this post contains no jokes about genitalia, passing wind in elevators, or how I cry during Extreme Home Makeover (I totally do).

Today, I received an unexpected card in the mail from my friend Liz.  I’ve known Liz most of my life, and we saw each other a lot growing up.  We ended up at the same high school, went on a French trip together, and even off to the same college (Miami University).

Liz was also my date freshman year for Homecoming, and she was nice enough to come down with spinal meningitis and nearly die, so I missed the dance.  Lame.

She now lives in Portland and is a zookeeper.

Anyway, she sent me this today.

The front of it was a holiday card that let me know I clearly didn’t make the December cut.  Obviously, this was a leftover, but, hey, I did bitch about never  receiving  holiday cards.

I think I’ve received (outside of holidays) a grand total of four personal notes in the past two years.  And one was from my insurance agent, Barbara.  And she sort of sucks.

I felt so amazing after getting this card, that I had to share it with all of you.  Also, please realize that Liz and I are not close.   I’ve spoken to her on the phone maybe once in ten years.  So to get this out of the blue meant a great deal to me.

My advice – pick someone with whom you don’t keep in touch.  Obviously pick someone attractive.  Then, write a personal note letting them know you are thinking about them.  You’ll make their day and they’ll probably write you into their will.  Which ultimately serves your estate should you outlive them.

Seriously, write a letter.  Don’t be a creep about it.  Short and sweet.  Don’t seal it in blood.

I’ll leave you with the guy that Jessica was standing behind as she checked in with Delta at the airport.  I made her promise to take this photo.